This was posted 5 months 11 days ago, and might be an out-dated deal. 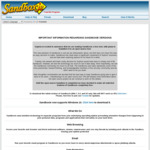 Sanboxie's previously paid features are now all free. Suppose it's an alternate program that using VirtualBox

What is Sandboxie and how is it different than other solutions?
Think of your PC as a piece of paper. Every program you run writes on the paper. When you run your browser, it writes on the paper about every site you visited. And any malware you come across will usually try to write itself into the paper.

Traditional privacy and anti-malware software try to locate and erase any writings they think you wouldn't want on the paper. Most of the times they get it right. But first the makers of these solutions must teach the solution what to look for on the paper, and also how to erase it safely.

Sophos is excited to announce that we are making Sandboxie a free tool, with plans to transition it to an open source tool.

This new evolution of Sandboxie is one we are enthusiastic about, but that does not mean this was an easy decision to make. Sandboxie has never been a significant component of Sophos’ business, and we have been exploring options for its future for a while.

Frankly, the easiest and least costly decision for Sophos would have been to simply end of life Sandboxie. However, we love the technology too much to see it fade away. More importantly, we love the Sandboxie community too much to do that. The Sandboxie user base represents some of the most passionate, forward thinking, and knowledgeable members of the security community and we didn’t want to let you down.

After thoughtful consideration we decided that the best way to keep Sandboxie going was to give it back to its users – transitioning it to an open source tool. We will release more information about the open source project as we continue to work on the details.

Until the open source transition is completed we have decided to make all restricted features of Sandboxie completely free. New deals from Computing category that have just been posted by our users.